CHEYENNE -- We all know about Bryce Meredith's exploits during his college career.

He was a three-time All-American. He made the Championship round twice. He was the story in the state throughout his three-year career as a wrestler at Wyoming. 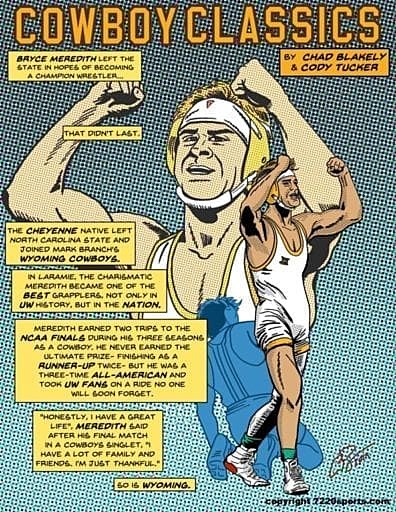 I was on the road to Thermopolis the first time Meredith made it to the finals in 2016 against Dean Heil from Oklahoma State. I have covered high school wrestling before. It's very much a main sport in Douglas and Glenrock. But I never wrestled in school. I learned the sport as I went.

Local coached like Bob Bath and Nic Dillon answered plenty of dumb questions from me.

That spring day, all I knew was a Wyoming Cowboy -- a fellow Cheyenne Central graduate -- was in the title match. The state was buzzing. I mashed the gas from Casper to Shoshoni. That's a stretch you want to speed on anyway, but on this day, we needed to find a television.

We did. Unfortunately the Wyoming Cowboy fell to the Oklahoma State Cowboy, 3-2.

In front of a capacity crowd inside Storey Gym in Cheyenne, the hometown kid finally got the best of Heil, who was a back-to-back champion and riding a 55-match win streak. Meredith gutted out a 2-1 overtime win, bringing the locals to their feet.

Since March Branch came to Laramie in 2008, wrestling has officially been on the map around here. The Cowboys are a perennial Top-25 team. They're in the Big XII Conference. They don't back down from blue-blood programs like OSU.

Because of the success of Branch, Meredith and the program as a whole, now even the most casual of fan can be heard at local watering holes talking about Wyoming wrestling.