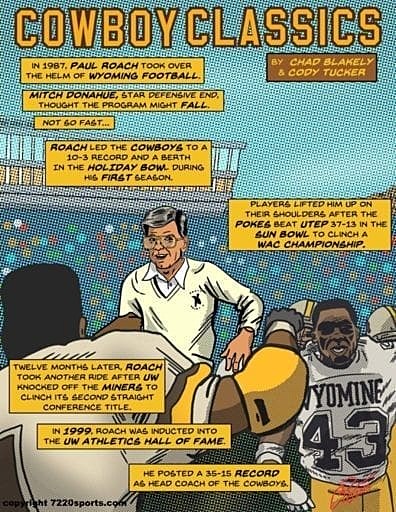 CHEYENNE -- Wyoming athletics director, Paul Roach, didn't have to look too hard for a new head football coach after Dennis Erickson abruptly abandoned his post after the 1986 season.

He just looked in the mirror.

Those are the words of two-time Western Athletic Conference Defensive Player of the Year, Mitch Donahue.

Erickson recruited him. He came to Laramie for a million reasons, Erickson being one of them.

"We didn't have the internet back then," Donahue continued. "We had no idea Roach coached with John Madden and Bart Starr in Green Bay."

Roach was also an assistant at Wyoming from 1962-70, helping lead the Cowboys to national prominence under Lloyd Eaton. Roach coached in the Sun and Sugar Bowl. Wyoming was a perennial powerhouse, consistently in the Top 25 in the nation. He was also there for the Black 14 incident, which became the undoing of Eaton and the program.

So, in 1987, when Roach was named the head coach, let's just say he knew what he was doing. And it didn't take long to prove it.

See that cartoon up above?

That's Roach up on the shoulders of his team at the Sun Bowl in El Paso after the Cowboys knocked off UTEP, 37-13, to clinch the WAC championship, the school's first since 1976. Wyoming finished that season 10-3 with a perfect 8-0 mark in conference play.

Roach and the Cowboys would play Iowa in the Holiday Bowl that season, falling 20-19 in San Diego.

The following season ended much the same. Wyoming once again beat the Miners, fans tore down the goal posts in War Memorial Stadium and Roach was taking a ride on the bulky shoulder pads of his players. UW was WAC champs again. They were heading to the Holiday Bowl again. Roach was the WAC Coach of the Year ... again.

They would fall in San Diego again, this time to Barry Sanders and the Oklahoma State Cowboys, 62-14.

Roach coached the Pokes until 1990, turning over the reins of the program to offensive coordinator, Joe Tiller. Roach went 35-15 in his four seasons at the helm, which is still the greatest win percentage from any UW head coach.

"I owe a lot to Paul Roach," Donahue said. "He is a great man. He was a players' coach. He loved us and we loved him."